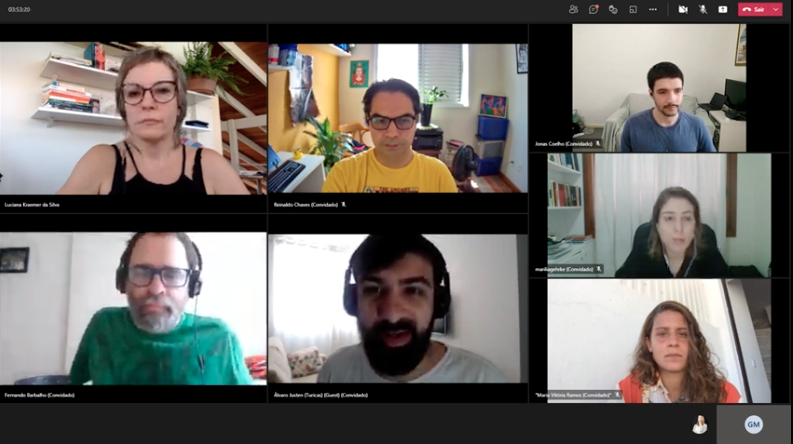 To share information on how people can track public money, Open Data Day Porto Alegre 2021, held online on March 13th, brought together significant initiatives led by civil society, journalists, researchers, and programmers. Representants of the open data community who were invited to conduct talks and workshops have revealed their knowledge through speaking and demonstrating tools and interacting with the audience.

There were activities all day, and the live sessions were transmitted on YouTube. Over 70 people participated in the morning and around 40 people in each workshop in the afternoon. The recording of the three sessions is already available and reached, together, around 450 views in the same weekend that #ODDPOA2021 occurred.

In the morning, Georg Neumann (Open Contracting Partnership) presented information on what citizens should pay attention to when monitoring public contracts, especially in Covid-19 times, once emergencies have the potential to increase corruption risk.

After his talk, five panelists presented their projects on the discussion “Investigating public spending through open data and the Access to Information Law.”. Maria Vitória Ramos (Fiquem Sabendo) explained how to use the Access of Information Law to uncover military pensions data. Álvaro Justen and Reinaldo Chaves (Cruza Grafos) demonstrated how to combine information about politicians and business partner companies to investigate corruption. Jonas Coelho (Transparência Brasil) showed a specialized project to monitor the public contracting of food to be distributed in schools. Fernando Barbalho (Secretaria do Tesouro Nacional) presented several public databases to consult the national and local government budget to Covid-19 expenses. The session was coordinated by Luciana Kraemer (Unisinos).

Workshop about the public budget: https://youtu.be/oYpqehDUBwU

Collaboration is required to create significant initiatives inside the open data community. People rarely have all the abilities to run a project only by themselves. It was evident in our opening panel: the five participants have known each other from before, mainly due to previous work. All of them have different backgrounds. The panelists also discussed the importance of offering an open-sourced and well-documented code to allow the public to scrutinize and reuse it in other projects.

Besides, the participants have highlighted the importance of demonstrating tools that help in public monitoring. Brazil has one of the highest number of deaths due to Covid-19, and it is paramount to comprehend public databases and contracts to monitor public attitudes to cope with the pandemic. For instance, the panelists have presented information on checking the amount of money spent by the national government in cities and states.

Furthermore, it was challenging to organize an online event this year and still guarantee an engaging schedule. Simultaneously, we were able to invite panelists from different parts of the country, and the audience was not geographically limited. In this regard, it was an opportunity to expand open data beyond Porto Alegre.

What I love the most about Open Data Day is the opportunity to meet people with different backgrounds and discuss relevant topics with a collaborative community. In general, people who celebrate Open Data Day do not just expect transparency from the government but also make significant changes in society. In the past years, I have learned that a person, alone, hardly executes a project. Through networking and cooperation, though, it is highly possible to play a significant role in society.