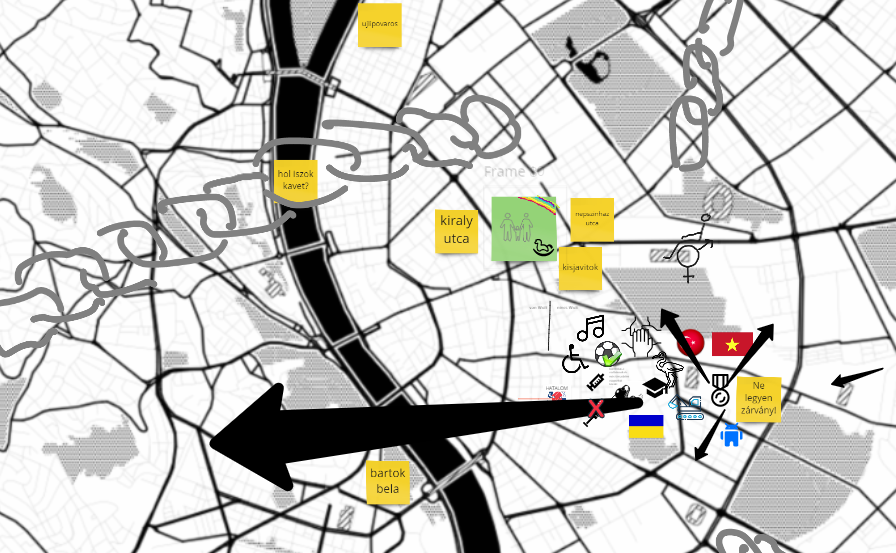 The Collective/Critical Cartography online workshop - co-organised by the Periféria Policy and Research Center as well as Kitti Baracsi (periferias dibujadas) - aimed at showing members of different Hungarian NGOs, activist groups, students and academic researchers how collective/critical cartography can contribute to their work, especially regarding open data.

In the first half of the workshop, Paul Schweizer from the Kollektiv Orangotango, Erin McElroy from the Anti-Eviction Mapping Project, as well as Kitti Baracsi presented their work with communities for progressive change, followed by a Q&A with the approximately 50 participants.

Paul showed how collective/critical cartography projects can show us perspectives, contexts, designs, uses and tools which are different from the dominant ones. Mapping practices in most of the cases also reveal new data about the world around us.

Kitti’s presentation about her work with children and marginalized groups underlined that experiences, feelings, and personal stories of people are important elements which we may wish to collect, discuss and present, if we are thinking about future trajectories of urban neighbourhoods.

In the second part of the workshop a smaller group of participants (around 20 people) worked collectively in a Miro whiteboard, and discussed how gentrification changed urban environments around the world and especially in Budapest. Group discussion revolved around the questions of displacement, changing small commerce and people’s desires. Groups developed symbologies and mapped urban change due to gentrification in contemporary Budapest (see the attached photo) and shared existing community mapping projects from their context.

The presentations referred to a wide range of sources which can be mobilised in collective/critical mapping projects. A lesson learned is also that during such collaborative projects, it is sometimes the collaboration process itself which is the result of the map-making, in some cases a new understanding of the world around us, whereas in some cases co-created maps help us to develop collective action against dominant narratives and existing power structures. Mapping is a way of gaining ownership over data and using it for advocacy purposes.

Participants of the second half of the workshop emphasised that they learned that collective/critical mapping is a fruitful method in mobilising and revealing knowledges of communities they are working with; how powerful maps might be in presenting data; as well as how online tools and platforms offer us valuable alternatives for working with communities in times when personal meeting is not possible.